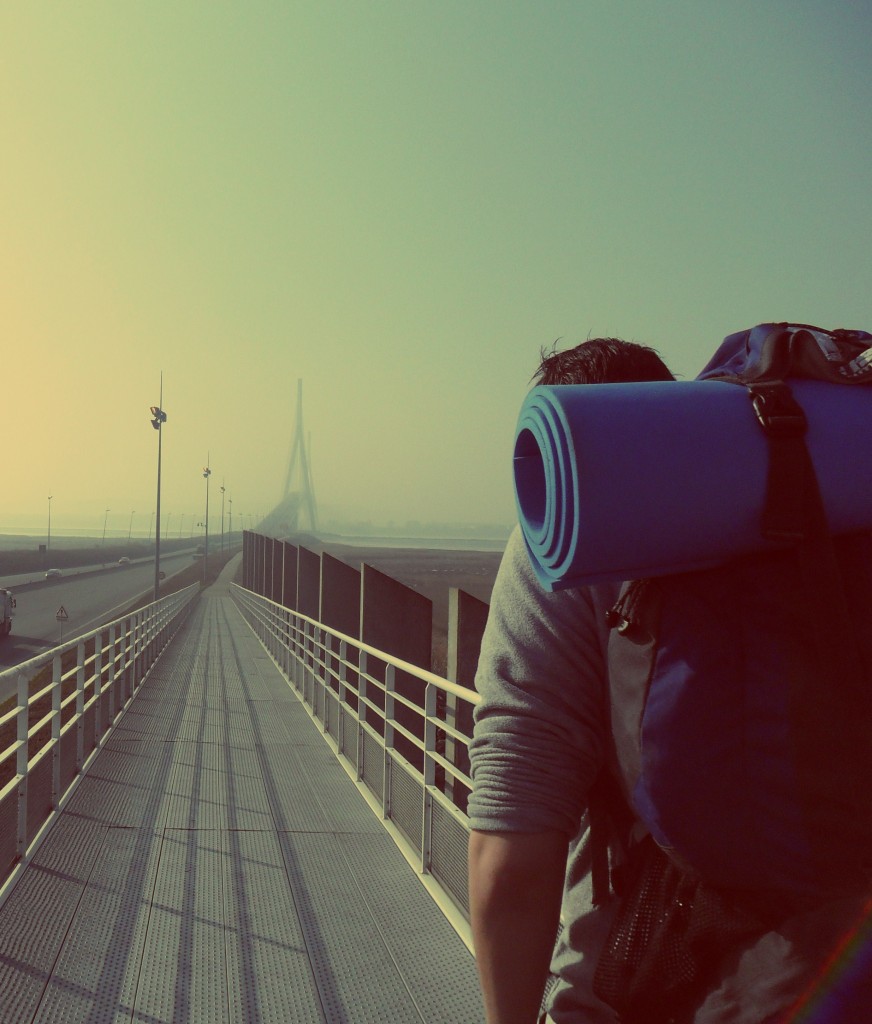 This is a two-part series based on Dave Hutt’s experiencing hitch-hiking and shuffling his way across Western Europe.

“Cigarette?” she asked, taking both hands off the wheel to fester around with a packet of smokes, sticking one between her teeth and motioning another to me. I said no. She shrugged and sparked a match.  Two minutes later…“Vin?” Reaching under her seat she pulled out a half-empty bottle of wine and passed it across. This time I shrugged and took a swig. I knew she wanted it back so I took more down my throat and tried hard to finish the bottle. She smiled as the last few drops of the red dripped into my mouth.

She had picked me up at a péage outside of Paris, after braking hard in the centre of the congested traffic and calling me over. I dodged angry cars with my backpack, threw it in the boot, she stepped on the pedal and we made a screeching getaway. The air inside was thick, like stepping into a vivarium of chain-smoking Gila monsters. Thirty minutes went by, a whole packet of smokes fluttered out of the window, she pinned me down with her life story.

My French is okay, conversational when the natives talk slowly. As I understood it, she was on her way to collect her son who was leaving prison. I couldn’t understand what he had done but her face showed she was the kind of woman who has been to too many prison-visits; and as the phone-calls kept on coming, she became more and more depressed. That’s when the second bottle of wine appeared. I saw the sign for Poitiers, where she agreed to drop me off, and then a sign for the next petrol station, where I needed to get out… 5 kilometres.

I hoped that she wasn’t as quick with the drink as she was with the smokes. Thankfully no; and she only got two swigs as I hung onto it tight. I snatched my bags from the boot, exchanged a double-cheeked bises and said my au-revoirs. She left the bottle of wine with me. I lay on the grass and scratched on a piece of cardboard my next destination with a marker pen…and I thought what the hell am I doing here?

This was my first solo hitch across France. The year before I had travelled from the UK to Morocco as part of a charity hitch-hike, but that time I had two friends with me. This time I was all on my own; self-reliant, self-dependent. So why did I decide to stick out my thumb instead of picking up a plane or bus ticket?

When I left my native Britain it seemed to be in a state of perpetual paranoia, with each person desperately trying to claw at their own panic room, hiding from neighbour, stranger, friend and family alike; wrapping themselves up safely in the latest copy of the Daily Mail and tentatively sleeping with the feint relief that today they weren’t raped, tortured or killed…but tomorrows a different day and a brand-new twenty-four hours to conjure up the worst of mankind in their own minds. I left with the hope that this was a gross exaggeration of mine; I wanted to see that the vast majority of people hadn’t slipped into the this cesspool of paranoia…so I set out of on my travels to see life, perhaps naively, as a world of trust and decency and kindness. I wanted to force myself into the private areas of people’s lives, such as in a car; to take hostage their personal space and see how they reacted…were they going to take me inside and treat me kindly, or keep me outside and look at me with fear? So outside Paris I slumped my bags down by the side of the road, in some unpopulated suburb that connects to the main motorway (the one that will take me all the way south into Spain) and I stuck my thumb out. My earlier hitching trips had taken long, as I had travelled with two others, but now on my own the first car stopped within fifteen minutes. The man drove me to the péage where the chain-smoking lady had picked me up.

In the service-station near Poitiers I sat down with my bottle of wine and a two-euro sandwich from the café inside. The sky was clear and the sun was strong, but I relished the heat and was thankful that it was no raining. Families sat around on benches to share a picnic and lorry drivers stopped sharply, pulled their curtains shut and devolved into the world of their cabin.  A youngish woman strolled up and asked if I was a hitchhiker. I nodded. She said that she was going another 150km down the road if I wanted a lift. Jesus, I don’t even have to beg at the side of the road to get a lift anymore. This woman had gone out of her way to invite me. I nestled my bags between the numerous pushchairs in the back and we set off. I offered her a swig of my wine and she looked at me as if I were half-mad. Obviously sensible drivers do exist on French motorways. I napped during the journey, rocking in and out of sleep; but the woman didn’t mind and wasn’t very chatty during the periods when I was awake.

Following this I got a lift to the outskirts of Bordeaux; then a Czech lorry-driver took me around the city and dropped me at a station further the south. He explained to me that lorry drivers find it difficult to pick up hitchhikers these days because of the strict rules they have to work by. According to the Czech, he is only allowed to work eight hour shifts and must take a twelve hour break between these. It is therefore unlikely that a lorry driver will pull into a service station during these eight hours; they only do so to sleep and wait. He also said that if he was to work nine hours or seven hours instead, he would have to pay…it was in the region of three-hundred pounds each hour (although his English was bad and I think this might have been an exaggeration…however my lack of luck with finding a lorry died.

To finish the day, a Jazz-crazed, early-twenty-something drove me frantically to Bayonne where he was late for his sister’s birthday party. We rocked our shoulders to the music and talked about our respective travels. We chatted like old friends, then a song we digged came on and the volume was whacked up, and after we jumped straight back into conversation.   He told me about Asia and I told him about Latin America. It was getting dark so he left me at a service-station just outside Bayonne, where I put up my tent and laid my head down. The next morning I awoke early and busied myself by asking if anyone was heading into Spain and completing going another 60km to San Sebastian. The lorry drivers were all sleeping. The cars packed with families, kids pressed up against the windows and bikes stacked on the roofs, looking like no one had moved for hours, were no good to me. But in half-an-hour I found a Portuguese guy, driving on British number plates, who was heading home. He agreed to drop me in San Sebastian and he did just that, going twenty minutes out of his way to leave me dead-bang in the centre of the city. That was it. Paris to San Sebastian… 825 kilometres and, just counting the time on the road and not sleeping, it took roughly twelve hours. Free of course. A similar journey by train would dent your wallet in the hundreds of euros. A coach would maybe be cheaper than train, but it would take the same amount of time it took me to hitch. river in service stations did show that he was right in breakdown between them and hitchikers).

Back On the Road: The Spectre of a Hitch-hiker in France and Spain – Part Two