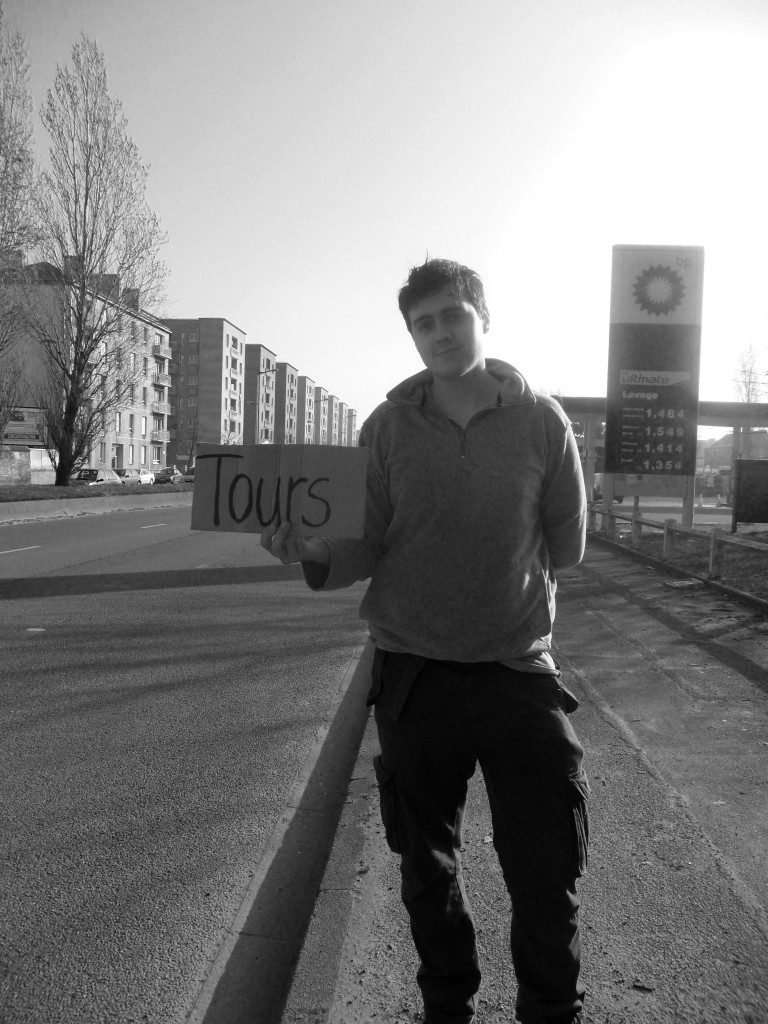 This is a two-part series based on Dave Hutt’s experiencing hitch-hiking and shuffling his way across Western Europe. Read the first part of this fantastic memoir here.

So is the hitchhiker now a mere phantom on the roads?… seen by a few, like an archaic apparition, and mentioned in the same breath as rural freak-heads still speak of the time they saw the headless-horseman one dark night.

Firstly, almost half a century has gone by since hitch-hiking’s heyday in the sixties. We are now living in the era of budget transportation. A £120 return flight to the south of France is now affordable to the majority of travellers; plus the ease and normality of flying makes it desirable. So hitch-hiking has been severely stomped by budget airlines, cheap coach fares and youth train tickets.

But perhaps the most widespread disease that has infected hitching is the insipidness of fear. This seems to have affected both hitchhiker and driver. By definition, the hitchhiker is putting his trust, and at times his life, in the ability of others to drive. The experienced have developed a desensitised view on how others drive, whether they constantly swerve all over the road or insist on always driving with only one hand. For me, it is this trust that makes hitching something worthwhile in the modern day. On trains, coaches and aeroplanes you cannot often see the driver or what he is doing, so there exists as blind-faith in their ability…also you tell yourself that they are professionals. But when you’re hitchhiking and a half-crazed bastard behind the wheel is a few inches away, you must place a whole-new level of faith in them not ending your life…and it’s refreshing. But it seems that others are less inclined to put their faith in others so readily. Talking to friends my age their general conclusion is ‘why the hell would I want to do something like that; you could be getting into a car with a nutter’.

Then there’s the paranoia felt by the drivers. The majority of people who pick up hitchers are young and male, yet women and the elderly do occasionally stop. But the numbers of people who stop is declining. The majority of those who picked me up said it was their first time. All agreed that in their youth they had done it. Drivers are no doubt scared of the horror stories that are bandied around about someone who picked up a serial killer or rapist, or such-and-such story. This fear can be seen on the faces of passing cars. For a novice hitchhiker the looks you get from the vast majority of drivers and passengers can be off-putting. They look at you if you are an oversized mass of roadkill, or a deranged fool whacking off on the side of the road, spoiling their otherwise pleasant journey. No doubt they are trying to decide whether you are a rapist or murderer…and where in this great country will you wait to knock the off if they stopped for you. But now I enjoy these stares.

Or is there a renaissance?

The stares confirm my choice in hitchhiking. The hitchhiker is an outsider on the road, the rugged individual who wanders the pavements with nothing but a tattered piece of cardboard, a thumb stuck up and faith in the kindness of others… he is the person who seeks disconformity by rejecting the bus, train and aeroplane, and instead comes to resemble a solitary figure of the past. It is a rejection of the paranoia of our world and the dimness of modern transport. Yes, an eight hour train ride might be more peaceful as you sit flicking through a book and listening to your Ipod. But it is colourless. I hear very few anecdotes about train travel other than the mind-numbing stories of delays, and ‘oh, guess how long we had to wait’….fuck off! Hitchhiking is about meeting new people, taking risks, having experiences, being forced to talk new languages (if travelling abroad), and most importantly affirming life. To sit back on a train is to travel in a world of greyness, to merely exist; to hitchhike is to see the world in its colour, to live life. To live and not just to exist; the motto of any decent traveller.

But I am not alone in believing this. There is a slow yet steady growth in the numbers of hitch-hikers. Continent-wide events such as the Link Community Development charity hitch has attracted thousands of travellers over the years. The website hitchwiki.org (which will be explored later) has had over half-a-million hits. Over the two years I have been hitching I have noticed an increase in the number of other hitchers I see. I have even spotted them in my native Britain where hitch-hiking was all but extinct. No doubt, the economic climate will surely have an effect on the cost effectiveness of hitching instead of plane or train transportation.

So if you want to join in the renaissance, then here’s some handy tips that I have learnt the hard way.

Unless you want to visit a city, avoid entering into it at all costs. Stick to the motorways! Most hitch-hikers will in theory travel from one city to the next, by which I mean if you start in Paris you will write the name of another city that is in your direction on your piece of cardboard. So if I want to get from Paris to Bordeaux, I will sign for Tours and Poitiers, because it is very unlikely you will get a lift all the way if you write Bordeaux straight away. It’s like jumping on stones to navigate your way across a pond.

However, never enter these cities or else you will find it very difficult to leave them. Even if it means you have to stop at a petrol station or a peage fifty miles before next city, at least you are on the right motorway.

First of all check GoogleMaps to make sure you know you’re route. Check for the motorways and it will tell you the quickest route. If you do not have a map of the country then print of some from the internet.

But the most important website is hitchwiki.org. For hitch-hikers, this is what Wikipedia is to students or trivia-geeks. Not only is it updated regularly, giving you valuable general advice and personal stories; but it also features a city-by-city guide to the best places to hitch from and where not to stand. For me this has been invaluable. On a later hitch-hike back to the UK when I got stuck in Paris all night long and took four hours to get away from the city, I had to use hitchwiki to find another place to stand. It took me two suburb buses and a lot of questioning of passers-by, but I found the spot and was picked up in five minutes.

On one hitch I forgot my marker pen and had to make do with a normal ballpoint. No one could read my signs. Thankfully I was travelling on a straight motorway to my destination, but if I had had to change roads then it would have been a disaster.

Remember that those who pick you up are doing you a favour. With radios, MP3s and Bluetooth headsets most drivers aren’t too desperate for conversation to stop for any soul they see on the side of the road. However, they do expect some conversation and an effort. If you are travelling abroad and can’t speak the language then make sure you learn some important phrases and sentences to introduce yourself. Don’t expect a Frenchman or Spaniard to speak English, in fact they’ll most likely get pissed off at having to make an extra effort and either shun a conversation or stop you somewhere unhelpful. If the driver likes you then they are more likely to go out of their way to help. The time I was picked up from Paris heading north, the driver and his daughter drove an extra ten minutes to drop me off at a peage, because I made a lot of conversation and was inquisitive about their life.

Unless you are sure that you can reach your destination during the day, then it is a good backup to carry a tent. On longer hitches you will need to sleep. Instead of heading into a city and paying extra for a hostel, pitch up at a service station for free. In Europe most service stations have grassy patches and are generally safe. Then in the morning you just have to pack up the tent and you can hitch straight away.

Back On the Road: The Spectre of a Hitch-hiker in France and Spain – Part One

Volunteering in India: Things to Take with You