Hey guys! Today we’re bringing you an awesome interview with our friend Nigel from Adventure Underwear. Adventure Underwear is the newest kid on the block when it comes to awesome travel gear, and Nigel has lots to say about his new company and product. If you’ve ever had to pay for your lunch with sopping wet Baht or fallen victim to stolen Euro, Adventure Underwear may just be for you. Read on to learn more about this fab new group and the man behind the briefs.

Hi Nigel! Thanks so much for joining us. For those who don’t know, could you tell us a little bit about yourself and your initiative, Adventure Underwear?

Well I’m just a passionate traveller like you and all your readers. Over the last few years I’ve been fortunate enough to swim with piranhas, live in slums and enjoy some of the wildest festivals on the planet.

I did however become quite frustrated by travel theft, there was no complete solution available to travellers like myself. Traditional approaches like money belts are uncomfortable, difficult to access, not waterproof and obvious to criminals. I wanted to create something better, so I came up with Adventure Underwear.

Adventure Underwear is a practical solution to safeguarding your valuables in the form of premium merino wool underwear with hidden waterproof pockets that keep your valuables safe anytime, anywhere. 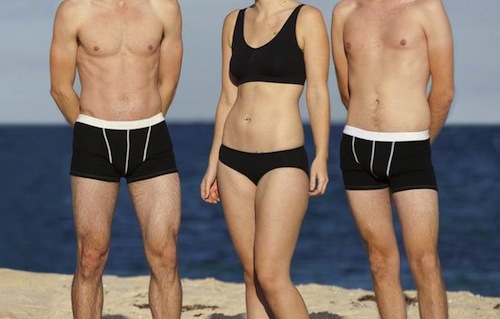 I believe the idea for Adventure Underwear came from a friend’s property being stolen while traveling? Is that the case? Is that a problem you’ve had while on the road?

Yes that’s right. She took a nap on Copacabana beach with her camera lying right in front of her face, 5 minutes later she woke up and it was gone.

I’ve come across lots of incidents like that while I’ve been travelling. I had friends who were held up on the beach at gun point, I saw a gang of kids pickpocket a backpacker in a block party, I had a friend get her bag stolen in a dark alleyway and I met a couple of guys who had been robbed at machete point. I don’t want to make people paranoid, but it’s important to realize that this kind of thing does happen.

Are you an avid traveler yourself? Any favorite or least favorite places you’ve journeyed to around the world?

I love to travel, to quote Mark Twain, I firmly believe that travel is fatal to prejudice, bigotry and narrow-mindedness.

Brazil & South Korea are the two countries I’ve had the most fun in, but it all comes down to the experiences you have while you’re there. When I was in Brazil I ended up helping homeless people park cars on the streets of Salvador after a local homeless guy had saved my ass earlier that day. Whilst in Korea my favourite place to visit was the infamous ‘Penis Park’ where I spent the entire day laughing at phallic sculptures, as any mature adult would do.

Pickpocketing and theft are an unfortunate reality of travel. Any crazy stories of some scrapes you’ve gotten into while traveling?

I totally agree, and most of the time it’s just a crime of opportunity, which is why I think it’s important to protect your valuables when you go travelling.

I have this bad habit of consistently putting myself in really stupid situations and then somehow weaselling my way out of them. During Carnival a gang of street kids were harassing my friends and I. They’d try diving their hands into our pockets when our backs were turned. We had to be really careful not to get aggressive with these kids at all because their big brothers were waiting across the street with loaded guns ready to step in. 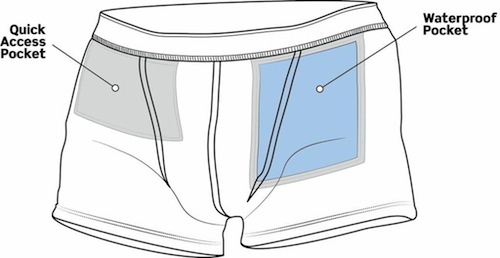 Why is a product like Adventure Underwear so important for travelers? Who is the product best suited for?

I think it’s important to have this balance between being prepared for the worst whilst not being paranoid about it. When you’re travelling you want the freedom to be spontaneous and enjoy any random adventure that comes your way. At the same time it’s important to protect your valuables, but if you spend all day worried about it then you’re not going to have a very fun trip. Adventure Underwear takes that worry off your mind because your valuables are safe no matter where you are or what you are doing.

But I will add that surfers, rock climbers and ice skaters have also tested out our product and found it really useful, so it’s not just for travelers.

What’s it been like working on a project like this? Any idea where the brand is headed next?

It’s been one of the most challenging projects I’ve ever undertaken, purely because of the steep learning curve. I actually graduated with a science degree so I’ve had to learn all about fabrics, manufacturing & marketing from scratch.

The challenge has been coming up with a design that is both practical and comfortable. That’s why we tested our prototypes with hundreds of travelers around the world, using their feedback to tweak our design until we ended up with something that was perfect for our customers.

Our next big project is designing the women’s version of Adventure Underwear. It’s a little hard for me to test out a women’s design with my anatomy, so we’re looking for women to help try out our prototypes and give us feedback.

And finally, where can our readers get their hands on these bad boys?

They can go to our kickstarter page right now and order a pair.

We’ve also got some creative rewards on offer for our kickstarter backers, like a brass compass and a hand carved treasure chest that are worth taking a look at.

Thanks so much for joining us, Nigel! Best of luck to you and Adventure Underwear!

Myths About Brits and How to Get to Really Know Them